ATCO and Siemens teamed up to add 12 fiberglass tanks to the Newell ATCO power converter station near Brooks, Alberta. Seven of the tanks were used as part of the project’s fire suppression system – a holding tank system allowing for nearly 1 million liters of emergency and fire suppression water to be pumped through almost a kilometer of IPEX pipe. The system creates a fire loop that feeds eight separate hydrants. The largest of the tanks measures over 70 feet long and 10 feet in diameter. The tanks are connected through a header system that feeds a 16” pump that pressurizes the system, on standby and ready for usage as required. Two of the remaining five tanks were designed for both a potable water holding system and a centralized septic holding tank, and three of the tanks were designed to handle the septic drainage associated with individual buildings around the site. Read the case study at equipmentreview.ca. 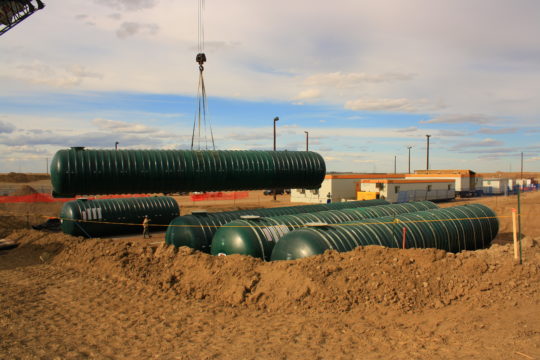